Tecnovap developed Steam Sky, an innovative steam generator with diesel-fired boiler designed to fight the weed growth and diffusion.
Such special machine acts though dry saturated steam that is delivered at high temperature: it assures a complete weed elimination in a wholly natural way and respects the environment and human health.
Steam replaces the use of glyphosates and/or other pesticides in this process.
The result of such application is considerable as weed regrowth process is much slower in areas treated with steam than in areas that has been treated with glyphosates up to now.

STEAM RESPECT THE ENVIRONMENT & THE HEALTH; 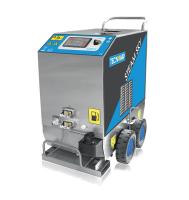